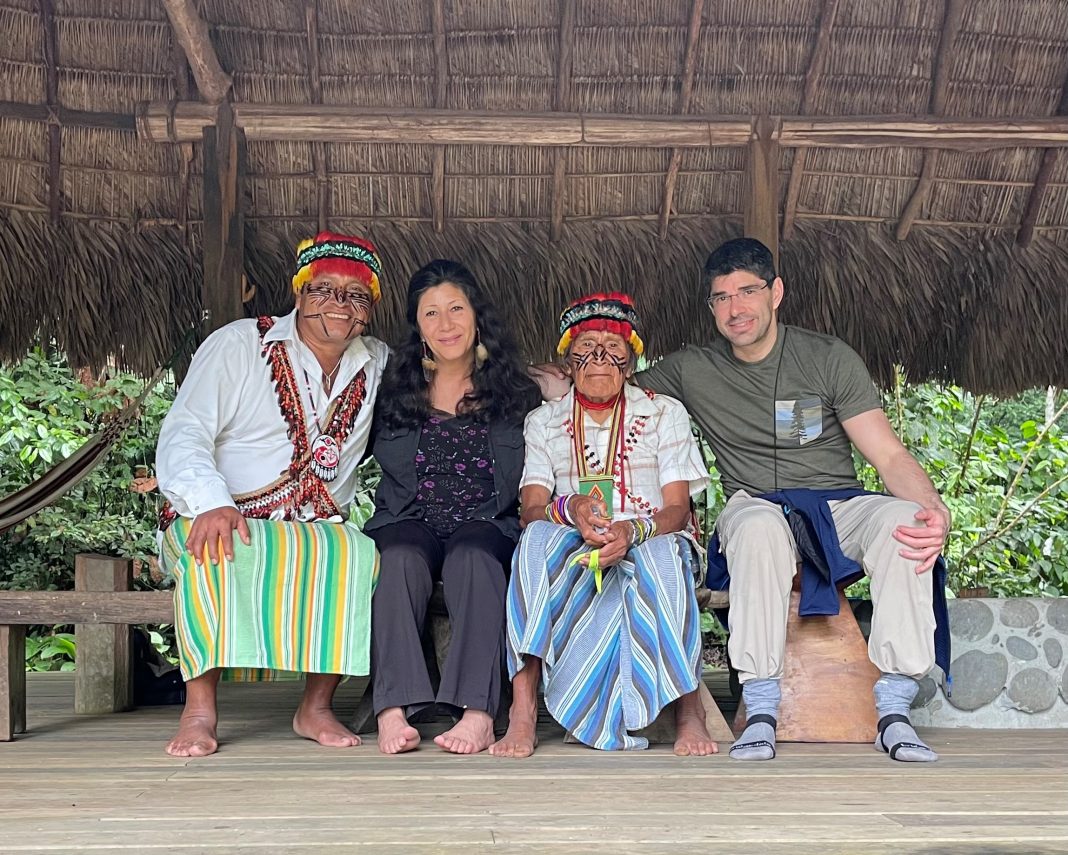 Reflections from a trip to Ecuador

The Amazon basin is witnessing, like no other place on the planet, the collision of two worlds: a dying world, characterized by an extractive and fossil economy that is addicted to growth at all costs and which fails to value our most important capital, nature… and an ancient world, centered around nature and life, the indigenous world which not only portrays the past but also leads us to the future.

In March I had the opportunity to visit Ecuador´s Amazon region on behalf of the Circular Bioeconomy Alliance; a truly transformative experience. My first day in the region, though, was a very depressing one. I was brought by a group of local indigenous people to see the impacts of illegal gold mining along the river Napo, near the town of Tena.

Extractive gold mining operations have led to a lunar landscape, a level of destruction I had not seen before. The local communities living nearby still do not have access to clean water and were also suffering from many consequences derived from months of co-existence with illegal mining workers. The mining activities seemed to me to not only suck the life out of nature but also from the people.

Unfortunately what I saw in Tena is not the exception but rather common, as the mining and oil industries are a main driver of deforestation in Ecuador and one of the main threats to indigenous communities.

Fortunately, the following day, I had the opportunity to see another world, a world full of life and respect for nature, a world of the past that should inspire the future too.  After an hour on a very small plane we landed in the community of Sharamentsa on the river Pastaza. I spent several days living with the Achuar along the river Pastaza, and it was inspirational to see the sacred respect they have for nature, as well as for the things that truly matter.

Walking the Amazon rainforest is very special, but doing so in the company of indigenous people is a holistic experience that allows you to witness the profound connection that humans can establish with nature, being part of it, living in harmony with it, shaping it and in turn being shaped by it. Such harmony requires an important ability that indigenous communities have and that in many respects we have lost in the modern world: the ability to transform knowledge into wisdom.

The indigenous knowledge and wisdom about the Amazon forest is the result of more than 12,000 years of sustainable co-existence. This makes the Amazon basin one of the world´s best examples in terms of agrobiodiversity, domestication of plants, and human symbiosis with natural ecosystems resulting in the distribution of particular plants positive for human health and wellbeing. During my stay in the Amazon, I could see that forests for indigenous communities are not only their pharmacies, groceries and workshop but they are also their healing, meditation and spiritual refuge. Almost every tree and plant seemed to have a specific use (knowledge) for them, which is the basis for their sacred respect to biodiversity and nature (wisdom).

I have conducted research on forests and the circular bioeconomy for twenty years, and have talked in many public events about it. I must admit that I have never seen so clearly before what I really mean when I say circular bioeconomy:  an economy powered by nature that prospers in harmony with nature. While I am conscious that we cannot all live the way indigenous communities live in the Amazon, we can still rethink many of our values and economic guiding principles to reconcile knowledge and wisdom, the ancient and the future, nature and humanity. The climate, biodiversity and “values” crises we are facing are not different crises, just different consequences of the same problem: our profound disconnection with nature, and therefore with our own selves.

The Amazon is the largest tropical forest in the world. More than 10% of the known plant and animal species coexist there. Today, this ecosystem of over 7 million square kilometres is threatened by deforestation, fires, mining, oil and gas development, large dams for hydroelectric generation and illegal invasions. What I saw in the Amazon is a collision of two worlds – which is resulting in the destruction of the future. The “modern world” is in many ways destroying the Amazon, but what happens in the Amazon will put at risk the future of the world.

Boulton and colleagues argue that three-quarters of the Amazon rainforests have lost resilience since 2000, meaning the forest is losing its ability to recover after droughts and other disturbances. This loss of resilience has profound implications for biodiversity, carbon storage and climate change at a global scale.

Deforestation and climate change, via increasing dry-season length and drought frequency, may already have pushed the Amazon close to a critical threshold of rainforest dieback. Already in the 1970s, Brazilian scientists Salati and colleagues demonstrated that not only is vegetation the consequence of climate, but also that vegetation can influence the climate. They scientifically showed that the Amazon generates approximately half of its own rainfall by recycling moisture 5 to 6 times, as airmasses move from the Atlantic across the basin to the west. Moisture from the Amazon is also important for rainfall and human wellbeing because it contributes to winter rainfall for parts of the La Plata basin, especially southern Paraguay, southern Brazil, Uruguay and central-eastern Argentina; in other regions, the moisture passes over the area, but does not precipitate out.

This brings us to the key question that Lovejoy and Nobre asked themselves a few years ago: where might the tipping point be for deforestation-generated degradation of the hydrological cycle? The first model to examine this question back in 2007 showed that at about 40% deforestation, central, southern and eastern Amazonia would experience diminished rainfall and a lengthier dry season, predicting a shift to savanna vegetation to the east. However, Lovejoy and Nobre believed that a tipping point for the Amazon system to flip to non-forest ecosystems in eastern, southern and central Amazonia could be reached at 20-25% deforestation and therefore it is urgent not only curb further deforestation, but also restore forests to create a margin of safety, by reducing the deforested area to less than 20%.

In this context, one of the main purposes of my trip to Ecuador as Chair of the Circular Bioeconomy Alliance was to launch a transformative initiative – a Living Laboratory to be developed by the indigenous communities with the support of our new member, Fundación Pachamama and our Living Lab coordinating organization, Reforest´Action. It aims to accelerate landscape restoration in Ecuador and Peru, while creating new forest-based value chains around cocoa, vanilla, medicinal plants and even eco-tourism, financing regenerative landscapes while preserving ancient traditions. The CBA will also support a new school for young indigenous leaders, to build new capacities to scale up restoration work and bio-based business models.

My trip ended with my participation in the COICA (coordinating organization for indigenous communities of the Amazon) congress taking place in Quito on 13 March, where I could share my reflections on the need to build new partnerships between the scientific community and the indigenous communities to better understand, monitor and manage many of the most precious primary forests in our planet.